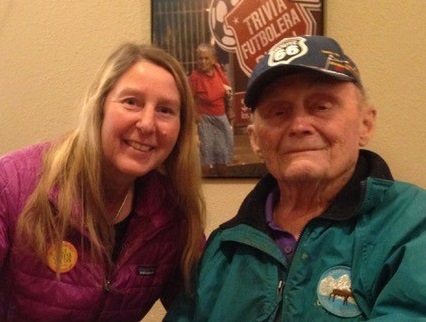 Doug Follett, one of the National Park Service’s oldest and longest-serving park rangers, knows a thing or two about change. He’s spent the past 57 summers in Glacier National Park, and has seen first-hand the effect that climate change has had on the plants and animals that call the park home. In the past, he’s talked about the obvious shrinking of the park’s glaciers, which began years before any discussion of possible causes.

In the 20-year period after 1961, he made a hundred trips to the 300-acre Sperry Glacier and noticed the ice slowly melting back over half a mile. And in this conversation with Climate Smart Board Member and City of Whitefish Project Engineer Karin Hilding, he speaks about the subtler but just as important changes that have occurred in the Whitefish biosphere as a result of the shifting environment.

Though it may be hard for visitors to appreciate, the climate of Whitefish has been unquestionably altered since the founding of the town in 1905. As Follett mentions, he originally moved to the edge of Whitefish Lake in 1952 and made a home amongst thick stands of western red cedar and Douglas fir. These trees are common to the Pacific Northwest and the Rockies, as both require a moist, temperate environment in order to thrive. Nowadays, however, yellow (or Ponderosa) pine has moved in from its more common home in the hot, dry mountain ranges of the Sierra Nevada in California. And the Douglas fir and red cedar that once lined the shores of the lake have begun to disappear without the moisture required to sustain them.

These tree migrations tell the story of Montana summers, which have become increasingly parched with heightened risk of fire. Climate Smart Glacier Country is working to prepare communities for the new risks that come with drier weather, and is helping Montana avoid a business-as-usual scenario that could lead to 4.5°F temperature increase by mid-century. For further discussion with Whitefish elders about the changes they’ve seen in the town climate over the years, read Whitefish High School student Luca Welle’s interview here. For a TED Talk by Glacier National Park Superintendent Jeff Mow on the difficulties of managing uncertainty in the face of climate change, see below.