What does climate change mean for Glacier National Park and region?

Climate change is real. It's already happening.  And the rate of change and impacts in and around Glacier National Park will accelerate in coming decades. 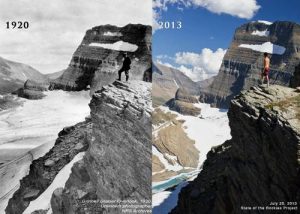 Glacier National Park is known around the world as a poster child for climate change, primarily because of the rapid melting of its mountain glaciers. Of the 150 glaciers present in 1850, only 25 glaciers larger than 25 acres remain. And scientists project that all will have melted away by 2030, creating a cascade of hydrologic impacts downstream.  But the local impacts of a warming global climate will be far broader than melting glaciers.

Trends and observations in Northwest Montana